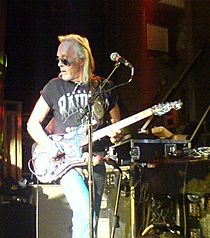 Gary Duncan (born Gary Ray Grubb, September 4, 1946 – June 29, 2019), also known as Gary Cole, was an American guitarist and singer. He is best remembered as a member of San Francisco psychedelic rock group Quicksilver Messenger Service. He was also a member of the Ratz and the Brogues. Duncan was born in San Diego, California and grew up in Woodland.

All content from Kiddle encyclopedia articles (including the article images and facts) can be freely used under Attribution-ShareAlike license, unless stated otherwise. Cite this article:
Gary Duncan Facts for Kids. Kiddle Encyclopedia.