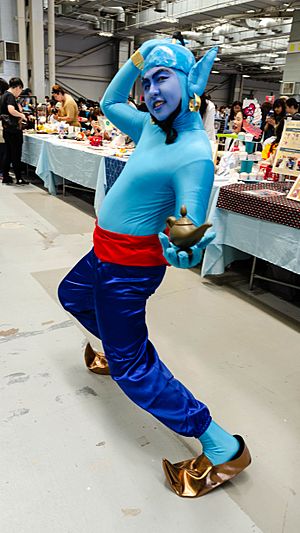 A cosplayer dressed up as the Genie.

The Genie is a character in Disney's Aladdin movies.

The Genie of the Lamp has been stuck in a magic lamp for 10,000 years. He was freed by Aladdin and he offered Aladdin three wishes. Aladdin asked him what he would wish for. Genie wished for his freedom from the lamp.

Robin Williams voiced the Genie in the 1992 cartoon and Aladdin and the King of Thieves. He wasn't able to return for the animated show and The Return of Jafar due to disagreements with Disney and with Dan Castellaneta voicing him in the meantime. Williams improvised a lot of dialogue for the Genie, which made the 1992 movie ineligible for Best Adapted Screenplay. Will Smith would play the Genie in the 2019 live-action remake.

All content from Kiddle encyclopedia articles (including the article images and facts) can be freely used under Attribution-ShareAlike license, unless stated otherwise. Cite this article:
Genie (Disney) Facts for Kids. Kiddle Encyclopedia.