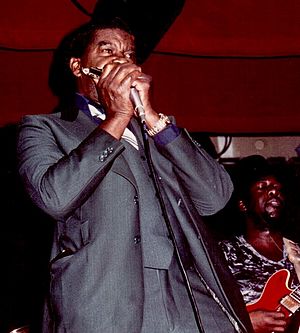 Born in West Helena, Arkansas he was brought up in Cairo, Illinois.He began playing professionally in 1951. He joined Muddy Waters' band in 1954. He was again member of the band in 1966.He left Chicago and spent much of his adult life on the West Coast.

Smith played with the blues combo, Bacon Fat, and mentored its harmonica player Rod Piazza. After this he played harmonica for Big Mama Thornton in the 1970s. He appeared on her album Jail (1975).Another student of him was William Clarke.

On the few solo albums he recorded one can hear the influence of Little Walter on his harmonica playing.George "Harmonica" Smith died in 1983, in Los Angeles, California at the age of 59.

All content from Kiddle encyclopedia articles (including the article images and facts) can be freely used under Attribution-ShareAlike license, unless stated otherwise. Cite this article:
George "Harmonica" Smith Facts for Kids. Kiddle Encyclopedia.