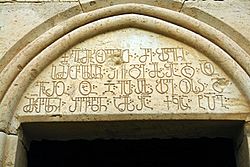 Greek and Aramaic influences have been shown, but some Georgian scholars like Tamaz V. Gamkrelidze have said that they were freely invented in imitation of the Greek model rather than directly based upon earlier forms of the Aramaic alphabet even though the Georgian phonological inventory is very different from Greek.

All content from Kiddle encyclopedia articles (including the article images and facts) can be freely used under Attribution-ShareAlike license, unless stated otherwise. Cite this article:
Georgian alphabet Facts for Kids. Kiddle Encyclopedia.