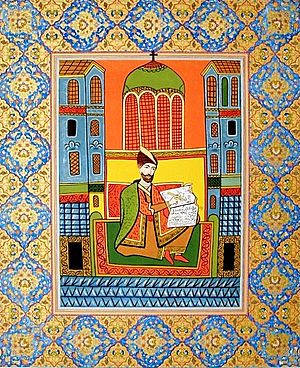 Shota Rustaveli, a painting by the French artist Fliert based on an old Georgian manuscript. 1852

Shota Rustaveli was a Georgian poet of the 12th century, and the greatest classic of Georgian secular literature. He is the author of The Knight in the Panther's Skin ("Vepkhistqaosani" in Georgian), the Georgian national epic poem. Little is known about life of the poet. He was a courtier of queen Tamara. 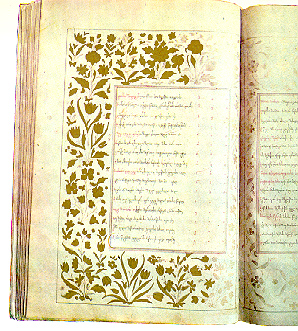 "The Knight in the Panther's Skin" (the actual name is Vepkhistkaosani, which means The wearer of Tiger's Skin) has been translated into many languages. It was first printed in 1712, in Tbilisi (capital of Georgia). It consists of 1576 four line stanzas with monorhyme. That means all lines rhyme to each other. The lines are made up of sixteen syllables.

All content from Kiddle encyclopedia articles (including the article images and facts) can be freely used under Attribution-ShareAlike license, unless stated otherwise. Cite this article:
Shota Rustaveli Facts for Kids. Kiddle Encyclopedia.