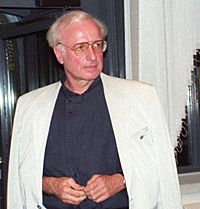 Gerd Albrecht (19 July 1935 – 2 February 2014) was a German conductor. He was a first-prize winner at the International Besançon Competition for Young Conductors at age 22. He composed with many famous European orchestras such as Deutsche Oper Berlin, the Tonhalle-Orchester Zürich and the Hamburg State Opera.

Albrecht was born in Essen. Albrecht died at the age of 78 on 2 February 2014 in Berlin, Germany.

All content from Kiddle encyclopedia articles (including the article images and facts) can be freely used under Attribution-ShareAlike license, unless stated otherwise. Cite this article:
Gerd Albrecht Facts for Kids. Kiddle Encyclopedia.