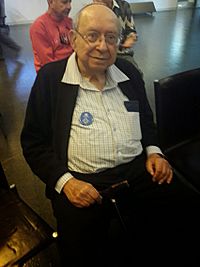 He became a member of the Bnei Akiva youth movement, and later joined the National Religious Party. In 1946 he was amongst the founders of kibbutz Ein Tzurim.

All content from Kiddle encyclopedia articles (including the article images and facts) can be freely used under Attribution-ShareAlike license, unless stated otherwise. Cite this article:
Gershon Shafat Facts for Kids. Kiddle Encyclopedia.