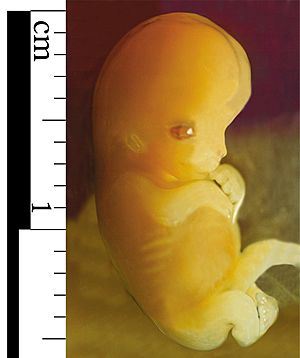 A human embryo. Humans have a gestation period of around 9 months

Some animals can have more than one embryo or fetus inside their body at the same time. It is the standard method for all mammals except monotremes.

The time between fertilization of the egg (ovum) and the birth of the baby or babies is called the gestation period.

All content from Kiddle encyclopedia articles (including the article images and facts) can be freely used under Attribution-ShareAlike license, unless stated otherwise. Cite this article:
Gestation Facts for Kids. Kiddle Encyclopedia.