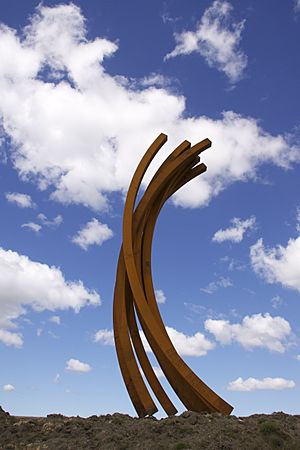 Gibbs Farm is an open-air sculpture park located in Kaipara Harbour, 47 kilometres (29 mi) north of Auckland, New Zealand. It contains the largest collection of large-scale outdoor sculptures in New Zealand. It is the private art collection of New Zealand businessman Alan Gibbs; however, it is open to the public on select days throughout the year, usually once per month, on a bookings-essential basis. There is no entrance fee for the public to visit.

After purchasing the 400 hectares (990 acres) of land for "The Farm" in 1991, Gibbs has collected major artworks by many world-renowned artists from New Zealand and overseas. Much of the artwork is commissioned and, as such, incorporates elements of the landscape into the artwork. The farm also includes several exotic animals such as emus and giraffes, a garage where visitors can glimpse the Gibbs Aquada through the window, and a full-scale wild west town complete with a saloon (in the installation called Grief). Grief was built through the inspiration of Gibbs' architect son-in-law, Noel Lane, who now cares for the property with Gibbs' daughter Amanda. The town is on a private area of the farm and is not open to the public.

The sculpture Electrum (for Len Lye), by Eric Orr, is the world's largest Tesla coil (11.6 metres or 38 feet tall) and numerous artworks are large enough to be seen from satellite imagery at high magnification.

Gibbs is a major sponsor of ACT New Zealand, and most years, the party holds its annual conference at the Gibbs Farm.

All content from Kiddle encyclopedia articles (including the article images and facts) can be freely used under Attribution-ShareAlike license, unless stated otherwise. Cite this article:
Gibbs Farm Facts for Kids. Kiddle Encyclopedia.