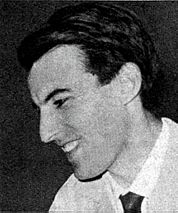 Gaslini was born in Milan, Italy.

In the 1950s and 1960s Gaslini performed with his own quartet. He was the first Italian musician mentioned as a "new talent" in the Down Beat poll and the first Italian officially invited to a jazz festival in the USA (New Orleans 1976-77). He worked with leading American soloists, such as Anthony Braxton, Steve Lacy, Don Cherry, Roswell Rudd, Eddie Gomez, Max Roach, Nacci Alberto, but also with the Argentinian Gato Barbieri and Frenchman Jean-Luc Ponty.

He has also adapted the compositions of Albert Ayler and Sun Ra for solo piano, which the Soul Note label has issued. He also composed the soundtrack of Michelangelo Antonioni's La notte (The Night, 1961).

All content from Kiddle encyclopedia articles (including the article images and facts) can be freely used under Attribution-ShareAlike license, unless stated otherwise. Cite this article:
Giorgio Gaslini Facts for Kids. Kiddle Encyclopedia.