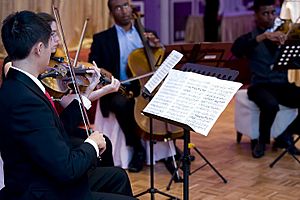 A string quartet in performance. From left to right - violin 1, violin 2, cello, viola

A string quartet in performance. From left to right - violin 1, violin 2, cello, viola

In Classical music, one of the most common combinations of four instruments in chamber music is the string quartet. String quartets most often consist of two violins, a viola, and a cello. The particular choice and number of instruments derives from the registers of the human voice: soprano, alto, tenor and bass. In the string quartet, two violins play the soprano and alto vocal registers, the viola plays the tenor register and the cello plays the bass register.

Less often, string quartets are written for other combinations of the standard string ensemble. These include quartets for one violin, two violas, and one cello, notably by Carl Stamitz (6 compositions) and others; and for one violin, one viola, and two cellos, by Johann Georg Albrechtsberger and others.

Another common standard classical quartet is the piano quartet, consisting of violin, viola, cello, and piano. Romantic composers Beethoven, Brahms, and Mendelssohn each wrote three important compositions in this form, and Mozart, Dvořák, and Gabriel Fauré each wrote two.

Wind quartets are scored either the same as a string quartet with the wind instrument replacing the first violin (i.e. scored for wind, violin, viola and cello) or are groups of four wind instruments. Among the latter, the SATB format woodwind quartet of flute, oboe, clarinet, and bassoon is relatively common.

Compositions for four singers have been written for quartets a cappella; accompanied by instruments, such as a piano; and accompanied by larger vocal forces, such as a choir. Brahms and Schubert wrote numerous pieces for four voices that were once popular in private salons, although they are seldom performed today. Vocal quartets also feature within larger classical compositions, such as opera, choral works, and symphonic compositions. The final movement of Beethoven's Ninth Symphony and the Verdi Requiem are two examples of renowned concert works that include vocal quartets.

Typically, a vocal quartet is composed of:

The baroque quartet is a form of music composition similar to the trio sonata, but with four music parts performed by three solo melodic instruments and basso continuo. The solo instruments could be strings or wind instruments.

In 20th century Western popular music, the term "vocal quartet" usually refers to ensembles of four singers of the same gender. This is particularly common for barbershop quartets and Gospel quartets.

The quartet lineup also is very common in pop and rock music. A standard quartet formation in pop and rock music is an ensemble consisting of two electric guitars, a bass guitar, and a drum kit. This configuration is sometimes modified by using a keyboard instrument (e.g., organ, piano, synthesizer) or a soloing instrument (e.g., saxophone) in place of the second electric guitar.

All content from Kiddle encyclopedia articles (including the article images and facts) can be freely used under Attribution-ShareAlike license, unless stated otherwise. Cite this article:
Quartet Facts for Kids. Kiddle Encyclopedia.