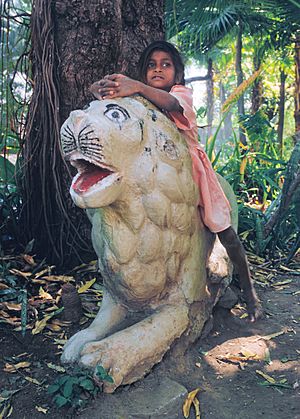 Girls' toys and games are toys and games specifically targeted at girls by the toy industry. They may be traditionally associated either exclusively or primarily with girls by adults and used by girls as an expression of identity. One commentator have argued that the market for girl's toys and games is more challenging than that for boys' toys and games.

Games and toys, or types of play, in many cultures are gender (and age) neutral, but some are given a gender role (masculine or feminine). Games given a gender role are exclusive or segregationist, and a game labelled as such is often considered by both children and adults as appropriate for boys or girls but not both, though the difference may be difficult to discern by cultural participants and outside observers. Some games, such as many sports, are or were officially gender segregated, and the gender role given a toy or game may effect its marketing.

For example, in European and American culture, mumblety-peg is traditionally considered macho and dangerous, and thus a boys' game, as a knife is inherently dangerous and shouldn't be played with. In contrast, jump rope and clapping games are considered girls' toys and games, and may be considered inappropriate for boys. 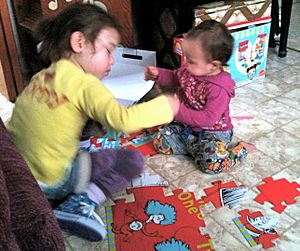 Age compression is the modern trend of children moving through play stages faster than they did in the past. Children have a desire to progress to more complex toys at a faster pace, girls in particular. Barbie dolls, for example, were once marketed to girls around 8 years old but have been found to be more popular in recent years with girls around 3 years old. The packaging for the dolls labels them appropriate for ages 3 and up. Boys, in contrast, apparently enjoy toys and games over a longer timespan, gravitating towards toys that meet their interest in assembling and disassembling mechanical toys, and toys that "move fast and things that fight". An industry executive points out that girls have entered the "tween" phase by the time they are 8 years old and want non-traditional toys, whereas boys have been maintaining an interest in traditional toys until they are 12 years old, meaning the traditional toy industry holds onto their boy customers for 50% longer than their girl customers.

Girls gravitate towards "music, clothes, make-up, television talent shows and celebrities". As young children are more exposed to and drawn to music intended for older children and teens, companies are having to rethink how they develop and market their products to them. Girls also demonstrate a longer loyalty to characters in toys and games marketed towards them. A variety of global toy companies have marketed themselves to this aspect of girls' development, for example, the Hello Kitty brand, and the Disney Princess franchise. Boys have shown an interest in computer games at an ever-younger age in recent years.

See also: List of historical sources for pink and blue as gender signifiers 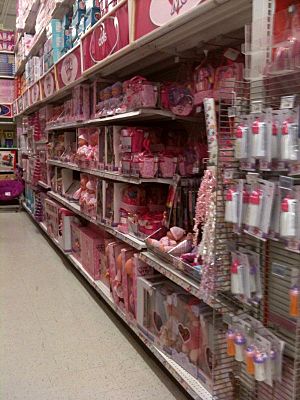 Rows of pink girls' toys in a Canadian store, 2011 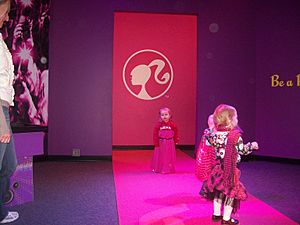 Girls in Barbie Fashion Show in Children's Museum of Indianapolis

In Western countries in recent years, girls' toys and games have shifted towards a dominant use of the colour pink. Those shopping for girls' toys can easily spot the girls' toy section in a store because of the rows of aisles almost entirely stacked with bright pink products. There has been a backlash against the predominant use of pink in girls' toys. One British parent launched a campaign called Pinkstinks against retailers marketing educational toys to girls in pink. The almost exclusive use of pink for girls' toys has raised concern that it is polarizing gender identity from an early age, to the detriment of girls, by over-emphasizing beauty and passivity over fun and creativity.

The reasons why girls may as a group prefer pink are not clear. Theories are divided between the nature versus nurture question. Social conditioning is one possible factor, since girls are surrounded by pink accessories and clothing from birth in some cultures. However, it has been proposed that a preference for pink is "hard-wired". One recent study showed "a marked preference for pink among girls and women in different cultures". Ben Goldacre has noted that it is likely to be cultural given that less than a hundred years ago pink was deemed the most appropriate colour for boys.

Amplifying gender identity differences between boys and girls is to the benefit of toy sellers. Targeted marketing has for many decades used the technique of categorizing children into segments for marketing purposes, much as the industry does with adults. Childhood age segments that are popularly believed to be identified by psychologists were in fact invented by children's clothing and toy manufacturers. Peggy Orenstein has drawn attention to research by Daniel Cook (a "historian of childhood consumerism"), that reveals the marketing origins of the familiar age group known as "toddler":

Trade publications counselled department stores that, in order to increase sales, they should create a "third stepping stone" between infant wear and older kids' clothes. They also advised segregating girls' and boys' clothing no later than age two: parents whose sons were "treated like a little man" were thought to be looser with their purse strings. It was only after "toddler" became common shoppers' parlance that it evolved into a broadly accepted developmental stage. 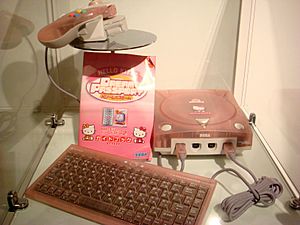 Technology has been embraced by many toy companies because of the gender-neutral best-selling toys that it helps create. One example is the popular Tamagotchi toy invented in Japan in the 1990s. It has sold tens of millions of units worldwide in its various versions. The Tamagotchi is an egg-shaped computerized toy that mimics a pet, and requires that the user update it regularly to feed it and provide other care. It remains particularly popular with young girls, however, and recent marketing is targeted towards girls; girls "like the new outfits and other items that can be downloaded via cellphone and transferred to their Tamagotchi device".

Girls' video games were a trend in the 1990s where video game developers attempted to make video games aimed specifically at girls. The genre did not see much critical or commercial success, and a leading developer, Purple Moon, was bought by Mattel in 1999.

In 2014, Moose Toys developed Shopkins toys which are about one inch in size and targeted at girls. Shopkins later released a number of Shopkins games for Android and iOS devices, and in Adobe Flash format The most popular game in the series is Shopkins World, which crossed 5 million downloads.

Worldwide video game sales have soared beyond traditional toy and game sales in the past decade, particularly in North America and the Middle East. The Nintendo Wii is a well-known recent innovation, which sells games aimed at either girls or boys, or both. Large traditional toy companies such as Hasbro have joined the trend, creating game applications for the iPhone and other smartphones, which are increasingly being used by children in affluent countries. 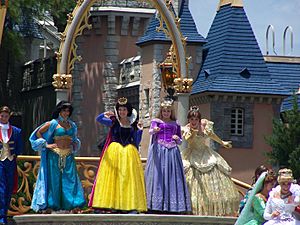 Disney Princess Party, event with a target audience of girls

Girls show an interest in beauty and grooming at a young age, before they are 10. Jane Davies, a British beauty therapist who provides private onsite makeover parties for preteens:

All the magazines for tweens carry articles about mini-makeovers and manicures, so they talk knowledgeably about mascaras that give you a false lash effect and which star uses which product.

In recent years, a number of companies have opened chain retail outlets in shopping centres to provide a play experience that goes beyond selling toys. Hamley's flagship store in London opened a "Hair and Nail Bar" dedicated to girls in 2009, and it has shown great popularity with girls in the 7 to 8-year-old range. Justice, a preteen girls' clothing store chain with more than 200 stores mainly in the northeastern and midwestern U.S., has a line of beauty and spa products available in its stores as well as clothing. In the United States, store chains in shopping malls that focus solely on makeup and spa experiences for preteen girls have been opening at a brisk pace. Tabby, for example, is a chain offering makeup parties in malls in several states.

The trend has proven somewhat resilient even in difficult economic times; one American study confirmed that 62 percent of parents would prefer to cut back on spending on themselves in favour of spending money on their children. On the other hand, Club Libby Lu, an American chain that at one point peaked with 98 stores, closed its doors in 2009 citing the dismal state of the economy as the reason. Scooops children's spas are a chain that has opened outlets in several U.S. states and Canada in recent years, including an outlet in Mall of America.

Aside from the store chains dedicated to offering beauty services to girls, toy manufacturers have adapted to the trend by tying it to their doll products. The American Girl line of dolls and books has dedicated stores across the United States, such as Mall of America and American Girl Place in Los Angeles, that include a doll hair salon, a photo studio and party hosting. The Nickelodeon television company's resort in Florida includes a girls' spa. The formula is proving to be successful globally. The world's largest Barbie doll store, a six-floor building in Shanghai, includes a "full-service day spa" where girls can get their hair cut and have a manicure done, as well as buying accessories and clothes emulating a Barbie-influenced style.

All content from Kiddle encyclopedia articles (including the article images and facts) can be freely used under Attribution-ShareAlike license, unless stated otherwise. Cite this article:
Girls' toys and games Facts for Kids. Kiddle Encyclopedia.