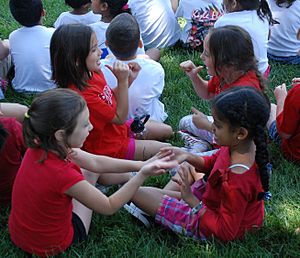 A clapping game (or hand game) is a type of usually cooperative (i.e., non-competitive) game which is generally played by two players and involves clapping as a rhythmic accompaniment to a singing game or reciting of a rhyme, often nursery rhymes. Clapping games are found throughout the world and similar games may be known throughout large areas with regional variation.

Nature of the games 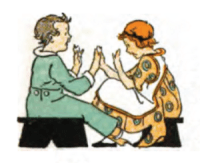 Illustration of a clapping game created by Andrew and Kyle Clements, c.1920

Due to the communication skills and coordination required, simple clapping games are age appropriate for children age 24 months and above. In many cultures clapping games are played by both sexes and all ages, but in many European and European-influenced cultures, they are largely the preserve of girls.

Claps commonly included in patterns are clapping one's own hands, clapping both hands of a partner, and clapping one hand of a partner, generally across such as the right hand of each player. The clapping may include other activities such as thigh slapping, or a final move such as touching the ground and freezing. Sara Bernstein describes seventy-nine "basic hand-claps".

Clapping patterns may be used with only specific rhymes, generically with most rhymes, or improvised. Children in different areas may be more or less strict about which claps accompany which rhymes but generally different clapping patterns may be used to accompany different rhymes. The rhymes are generally very similar to a jump-rope rhymes. Some games are played without a rhyme, such as 'Slide', and not all require the players to clap each other's hands, such as 'Sevens.'

Clapping games are a part of oral tradition. As such there are a variety of distinct clapping games or families of games. A game may be performed or played in various versions found in different areas and times and often according to ethnicity. For example, "Hello, Operator" may be called "Miss Susie" or "Miss Lucy" and may contain, omit, or vary verses or specific lines. Clapping patterns and actions may also vary. There is no canonical version of any game though children often fight over whose version is "right" or "real". 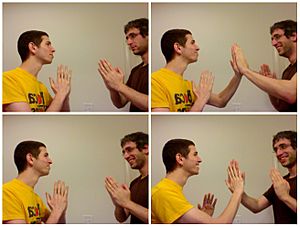 A common style of playing "Pat-a-Cake".

All content from Kiddle encyclopedia articles (including the article images and facts) can be freely used under Attribution-ShareAlike license, unless stated otherwise. Cite this article:
Clapping game Facts for Kids. Kiddle Encyclopedia.