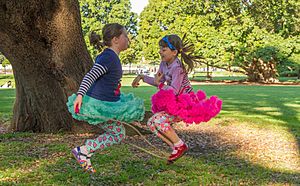 A skipping rhyme (occasionally skipping-rope rhyme or jump-rope rhyme), is a rhyme chanted by children while skipping. Such rhymes have been recorded in all cultures where skipping is played. Examples of English-language rhymes have been found going back to at least the 17th century. Like most folklore, skipping rhymes tend to be found in many different variations. The article includes those chants used by English speaking children.

Explorers reported seeing aborigines jumping with vines in the 16th century. European boys started jumping rope in the early 17th century. The activity was considered indecent for girls because they might show their ankles. There were no associated chants. This changed in the early 18th century. Girls began to jump rope. They added the chants, owned the rope, controlled the game, and decided who participated.

In the United States, domination of the activity by girls occurred when their families moved into the cities in the late 19th century. There, they found sidewalks and other smooth surfaces conducive to jumping rope, along with a host of contemporaries.

Another source suggests that, prior to 1833, the invention of pantaloons, enabled girls to jump rope without displaying ankles.

Chants are intended to structure the game and are secondary, explaining the nonsense or irrational lyrics. These chants are unusual inasmuch as they were transmitted from child to child usually without an underlying reason, as opposed to nursery rhymes which were transmitted from adult to child and often contained a moral. Chants may contain girlish references to boyfriends or marriage.

Two girls with a long rope stood about 12 feet (3.7 m) apart and turned the rope as other children took turns jumping. If one were not a good jumper, one would be an 'Ever-Laster,' that is, one would perpetually turn the rope. When it was a child's turn to jump, she would enter as the rope turned, and jump to the rhyme until she missed. Then she would become a rope-turner, and the next child in line would take her place.

Jump in, jump out

For a line of potential jumpers, the jumpers were restricted on time by the length of the chant/ They jumped in at the beginning, jumped out at the end and the next jumper took their turn.

To teach the ladies how to dance.
First the heel, then the toe,
Then the splits, and around you go!
Salute to the Captain,
Bow to the Queen,
And turn your back on the big submarine!

In another version, the teacher is "Benjamin Franklin." In the Charlie Chaplin rhyme, the child jumping had to follow directions as the rope was turning: touching the heel of one foot on the ground; touching the toe of the same foot on the ground; doing a (short) split of the feet, turning around, saluting, bowing, and jumping out from the turning rope on the last line. This rhyme, c. 1942, reflects children's awareness of World War II (The Queen to whom we bowed was the mother of the present Queen of England).

An Australian version of the Charlie Chaplin Skipping Song, as sung at Salisbury Primary School in Brisbane, Australia in the mid 1950s, is as follows:

January, February, March, April, May, etc. (each child had to jump in during the month they were born).

Most rhymes are intended to count the number of jumps the skipper takes without stumbling. These were essentially restricted to times when there were relatively few jumpers and time was abundant. These rhymes can take very simple forms.

This chant was collected in London in the 1950s:

Ran around the cor-(skipper jumps out, and turners continue the syllable until they reenter)-ner
and slammed on the brakes, but the brakes didn't work,
So I bumped into a lady who bumped into a man,
Who bumped into a police car, man, oh man!
Policeman caught me and put me in jail,
All I had was ginger ale
How many bottles did I drink?
10! 20! 30! 40! ...(increases by 10 for each successful jump)

Another rendition substitutes, "teddy bear" for "butterfly. This can be dated no earlier than the early 20th century, to the term of Theodore Roosevelt.

Who's your boyfriend/girlfriend, I forgot;
Is it an A! B! C!

The counting continues as long as the jumper avoids faulting. If they do then the counting starts again.:

Some rhymes are intended to test the agility of the jumper by turning the rope more rapidly. The key word to start turning fast is often "pepper" to indicate speed, such as:

All content from Kiddle encyclopedia articles (including the article images and facts) can be freely used under Attribution-ShareAlike license, unless stated otherwise. Cite this article:
Skipping-rope rhyme Facts for Kids. Kiddle Encyclopedia.