Miss Lucy had a baby facts for kids

"Miss Lucy had a baby...", also known by various other names, is an American schoolyard rhyme. Originally used as a jump-rope chant, it is now more often sung alone or as part of a clapping game. It has many variations, possibly originating from it, or from its predecessors.

The song is often combined or confused with the similar but cruder "Miss Susie had a steamboat", which uses the same tune and was also used as a jump-rope game.

As in "Miss Susie", the rhyme is organized by its meter, an accentual verse, in trimeter. Accentual verse allows for set number of accents regardless of the number of syllables in the verse. It is a common form in English folk verse, especially in nursery rhymes and jump-rope rhymes. The song shares much of the same melody as the 1937 "The Merry-Go-Round Broke Down" used by Warner Bros. as the theme to their Looney Tunes cartoons. 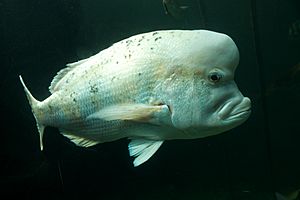 The nickname 'Miss Lucy' has been used in the context of literature and art:

A version of the song has been "Miss Lucy had a steamboat". A famous steamboat disaster tied to the name Lucy occurred in 1844, when the Lucy Walker steamboat, a ship named after a race-horse owned by a Cherokee native American and run by a team of his African American slaves, blew up.

In Western Africa, the name "Miss Lucy" is the nickname of an endangered species of fish Chrysoblephus gibbiceps.

The nickname 'Tiny Tim' has been used in the context of art and literature;

All content from Kiddle encyclopedia articles (including the article images and facts) can be freely used under Attribution-ShareAlike license, unless stated otherwise. Cite this article:
Miss Lucy had a baby Facts for Kids. Kiddle Encyclopedia.