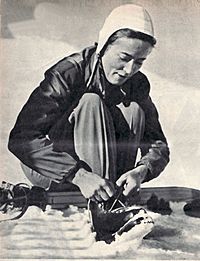 At the 1952 Olympics in Oslo Minuzzo was the bronze medalist in the women's downhill competition.

At the 1960 Olympics, she was bronze medalist in the women's giant slalom event.

At the 1956 Winter Olympics in Cortina d'Ampezzo, Minuzzo made history by becoming the first woman to take the Olympic Oath.

All content from Kiddle encyclopedia articles (including the article images and facts) can be freely used under Attribution-ShareAlike license, unless stated otherwise. Cite this article:
Giuliana Minuzzo Facts for Kids. Kiddle Encyclopedia.