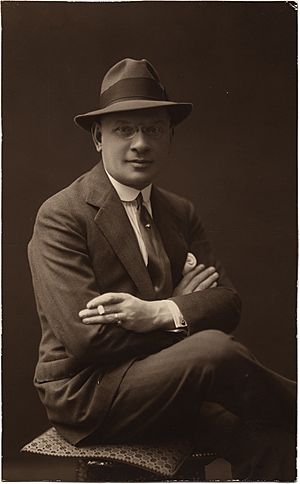 Adami was born in Verona. He graduated at the University of Padua in Law but dedicated his career as a writer, theatre playwright, and then music critic. After the death of Puccini, Adami published a collection of the composer's letters in Epistolario (1928). He also published his personal recollections; Giulio Ricordi e i suoi musicisti (1933); Giacomo Puccini (1935) (this was one of the earliest biographies of the composer); and a second biography of Puccini Il romanzo della vita di Giacomo Puccini (1942).

Adami also wrote librettos for other composers including Riccardo Zandonai's La via della finestra (1919); and Franco Vittadini's Anima allegra (1921) and Nazareth (1925). He was a music critic for La sera (Milan) and for the review La comedia from 1931 to 1934. Adami acted as publicist with the house of Ricordi to the end of his life. He died in Milan aged 67.

All content from Kiddle encyclopedia articles (including the article images and facts) can be freely used under Attribution-ShareAlike license, unless stated otherwise. Cite this article:
Giuseppe Adami Facts for Kids. Kiddle Encyclopedia.