(phi) is usually used as the name for the golden ratio.

. Because these two ratios are equal, this is true:

One way to write this number is

is like any number which, when multiplied by itself, makes 5 (or which number is multiplied):

The golden ratio is an irrational number. If a person tries to write it, it will never stop and never make a pattern, but it will start this way: 1.6180339887... An important thing about this number is that a person can subtract 1 from it or divide 1 by it. Either way, the number will still keep going and never stop. 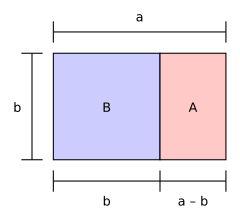 The large rectangle BA is a golden rectangle; that is, the proportion b:a is 1:

. For any such rectangle, and only for rectangles of that specific proportion, if we remove square B, what is left, A, is another golden rectangle; that is, with the same proportions as the original rectangle.

. The blue part (B) is a square, and the pink part by itself (A) is another golden rectangle because 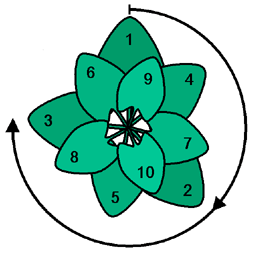 Using the golden angle will optimally use the light of the sun. This is a view from the top. 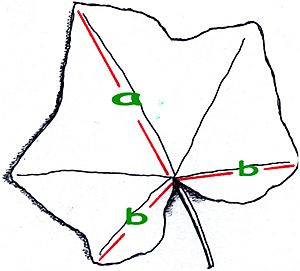 A leaf of common ivy, showing the golden ratio

All content from Kiddle encyclopedia articles (including the article images and facts) can be freely used under Attribution-ShareAlike license, unless stated otherwise. Cite this article:
Golden ratio Facts for Kids. Kiddle Encyclopedia.