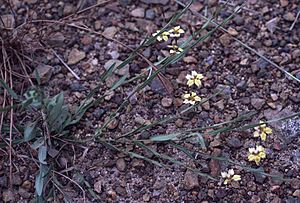 Goodenia armstrongiana is a species of flowering plant in the family Goodeniaceae and is endemic to northern Australia. It is an erect to low-lying herb with egg-shaped to narrow elliptic leaves, sometimes with small teeth on the edges, racemes of white or yellow flowers with leaf-like bracts at the base, and oval fruit.

This goodenia grows in woodland and savanna from Arnhem Land and the Victoria River district in the Northern Territory to north Queensland and New Guinea.

All content from Kiddle encyclopedia articles (including the article images and facts) can be freely used under Attribution-ShareAlike license, unless stated otherwise. Cite this article:
Goodenia armstrongiana Facts for Kids. Kiddle Encyclopedia.