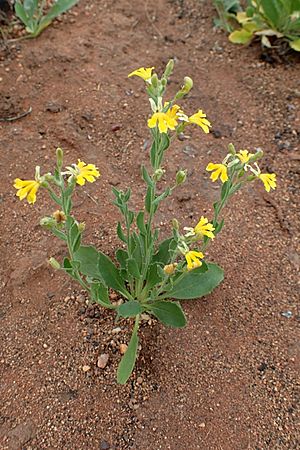 Goodenia heterochila, commonly known as serrated goodenia, is a species of flowering plant in the family Goodeniaceae and is endemic to arid areas of Australia. It is an erect or ascending perennial herb with lance-shaped to egg-shaped stem leaves with the narrow end towards the base, and racemes of yellow flowers with a brownish centre.

This goodenia grows in sandy soil in arid areas of the Northern Territory, South Australia, Queensland and Western Australia.

All content from Kiddle encyclopedia articles (including the article images and facts) can be freely used under Attribution-ShareAlike license, unless stated otherwise. Cite this article:
Goodenia heterochila Facts for Kids. Kiddle Encyclopedia.