The Gordon Setter is a large breed of dog, a member of the setter family that also includes both the better-known Irish Setter and the English Setter. Setter breeds are classified as members of either the Sporting or Gundog Group depending on the national kennel club or council. The original purpose of the breed was to hunt gamebirds. Their quarry in the United Kingdom, may be partridge or grouse, pheasant, ptarmigan, blackgame, snipe or woodcock: whilst overseas bird dogs are worked on quail, willow grouse, sand grouse, guinea fowl, sagehen, francolin and any other bird that will sit to a dog—that is to say, will attempt to avoid a potential predator by concealment rather than by taking to the wing at the first sign of danger. It is this combination of a bird that will sit fast in front of a dog that will remain on point that makes bird dog work possible. 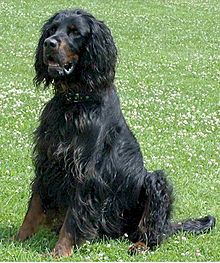 Gordon Setters, also known as "black and tans", have a coal-black coat with distinctive markings of a rich chestnut or mahogany colour on their paws and lower legs, vents, throat, and muzzles; one spot above each eye; and two spots on their chest. A small amount of white is allowed on the chest. Although uncommon, red Gordons are occasionally born to normal-coloured parents, the result of expression of a recessive red gene. Predominantly tan, red, or buff dogs are ineligible for showing. A Gordon's coat is straight or slightly waved (but not curly), long and silky, with chest, stomach, ear, leg, and tail feathering. According to the AKC breed standard, "the bearing is intelligent, noble, and dignified". They are the heaviest of the setter breeds, with males reaching 27 inches (69 cm) at the withers and up to 80 pounds (36 kg) in weight.

The AKC describes the Gordon Setter temperament as "alert, interested, and confident. He is fearless and willing, intelligent, and capable. He is loyal and affectionate, and strong-minded enough to stand the rigors of training". Gordons are intensely loyal to their owners; thrive in an attentive, loving environment; and are good family dogs. Puppies and adult dogs can be quite boisterous, and although they are patient by nature, may not be suitable for households with very young children. Gordons are sensitive and empathic, eager to learn, and need firm but gentle handling. Early socialisation and obedience training is important. The breed is one of the slowest to mature, not hitting prime until three years of age or more, and will show puppy-like characteristics well into their older years.

Gordons were bred to run, and require 60 to 80 minutes of vigorous exercise daily. Young dogs should not be over-exercised or begin agility training until they are at least 18 months old, to avoid joint problems later in life. Because of their hunting instincts, Gordons should not be allowed to roam freely if unsupervised, as they are apt to wander into a potentially dangerous traffic situation while following a scent. 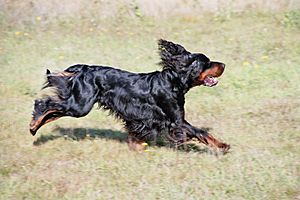 Although not as prone to hip dysplasia as many of the larger breeds, Gordons can suffer from the condition. Other health issues can include hypothyroidism, gastric torsion (bloat) and eye diseases such as progressive retinal atrophy (PRA), and cataracts. Life expectancy for the breed is generally about 10 to 12 years.

At the beginning of 2009, a report was issued to all of the Breed Clubs in the UK concerning cases of late onset PRA in Gordon Setters.

On March 14, 2011, Animal Health Trust (AHT) made a DNA test available. The mutation is termed rcd4 (for rod-cone degeneration 4) to distinguish it from other, previously described forms of rod-cone degeneration. It is recessive, and 19 out of the 21 Gordons in their study who had clinical signs of PRA were homozygous for this mutation, indicating it is the major cause of PRA in the breed.

As many as 50% of Gordon Setters may be carriers. 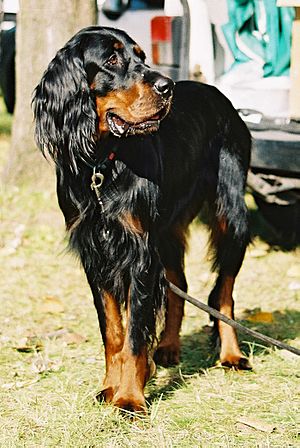 Domesticated Dogs Finding Their Game by Scent, But Not Killing It, Being Chiefly Used in Aid of the Gun"

Many of the gun dogs described by Stonehenge are no longer to be found in the United Kingdom or have been absorbed into one of the other breeds. The Russian Setter, the Welsh Setter, Northern Irish Water Spaniel, Southern Irish Water Spaniel and English Water Spaniel, the Spanish Pointer and the Portuguese Pointer have all disappeared in the past hundred and fifty years, and the pictures of some of the breeds that are still with us show considerable differences to the breed as we see them today.

Edward Laverick wrote in The Setter, published in 1872: "the setter is but an improved spaniel"; while the Rev Pearce in The Dog, published in the same year, said, 'he is a direct descendant of the Spaniel: "a Setting Spaniel" was the first Setter'. Since then this is the generally agreed with conclusion that the Setter was primarily derived from the old Land Spaniel, so called so as to distinguish it from the Water Spaniel. It is however likely that outside crosses with Hounds or Pointers did influence its development. William Taplin in The Sportsman's Cabinet (1803–04) maintained that it was "originally produced by a commixture between the Spanish pointer and the larger breed of the English spaniel". 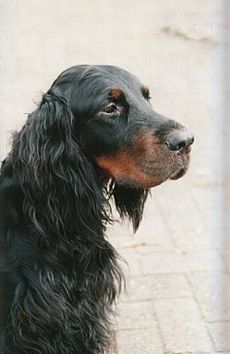 We now really need not to go back to the Spaniel and its specialised development into the setting-dog, as it was called, and can be found in the work by the famous French sportsman, Gaston de Foix, Vicomte de Béarn (1331–91), who it is said owned about 1500 dogs 'brought from all countries of Europe' and was known as 'Gaston Phèbus' owing to his love for the chase. This work is called Livre de Chasse or Miroir de Phèbus, and was started in 1387. This work was the bases of The Master of Game written between 1406 and 1413 by Edward III's grandson, Edward, second Duke of York, who acknowledged his debt to de Foix. Below is the main passage referring to the Spaniel and the Setting-dog, as republished in 1904:

Another kind of dog is that is called falcon-dog or spaniel [espaignols in the French original] because it comes from Spain, notwithstanding that there are many in other countries....

A good spaniel should not be too rough, though his tail should be rough. The good qualities that such a dogs are these: They love well their masters and follow them without losing, although they be in a great crowd of men, and commonly they go before their master, running and wagging their tail, and raise or start fowl and wild beasts. But their right craft is of the partridge and of the quail. It is good for a man that has a noble goshawk, or a tierecel, or a sparrowhawk for the partridges to have such dogs; and also, when they are taught to be couchers (chiens couchants in the original French—ed.), they are good for taking partridge and quail with the net...

The modern Gordon Setter is a predominantly black dog with rich tan marking on the muzzle, legs and chest. A little bigger and heavier than either the Irish or English, he is nevertheless descended from the same genetic mixing pot, which undoubtedly has its origins among those setting spaniels we met earlier. The Kennel Club applied the name 'Gordon Setter' to the breed in 1924. Before that they were known as black and tan setters, and were found in many kennels beside those of the Alexander Gordon, 4th Duke of Gordon (1743–1827). Indeed, as we shall see, there is plenty of evidence that the majority of the setters at Gordon Castle during the Duke's time were tri-coloured rather than pure black and tan.

The breed was brought to the United States by George Blunt and Daniel Webster in 1842, with the purchase of two dogs named Rake and Rachel from the Duke's kennels. The American Kennel Club officially recognised the breed in 1892.

All content from Kiddle encyclopedia articles (including the article images and facts) can be freely used under Attribution-ShareAlike license, unless stated otherwise. Cite this article:
Gordon Setter Facts for Kids. Kiddle Encyclopedia.