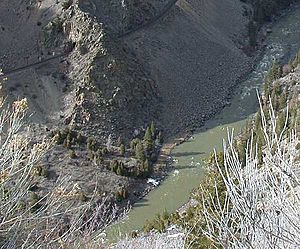 Gore Canyon near one of the shorter tunnels on the track. The alarm fences located along the track in this area are visible

The canyon is roadless and inaccessible by most traffic, except for the Union Pacific Railroad's Moffat Subdivision and whitewater boats. Despite the short length, the canyon presented a formidable obstacle for the railroad, and the building of the line through it was considered a monumental engineering achievement in its day. Although the canyon is not directly accessible by roads, it is possible to view part of the canyon from the Grand County road (CR 1, or Trough Road) that passes along its southern rim, as part of the Colorado Headwaters Scenic Byway. The California Zephyr also travels through the canyon.

Gore Canyon is also famous for its wild class V whitewater. "Captain" Samuel Adams considered it unnavigable by boat during his expedition in the 19th century. The construction of the railroad has added boulders and other hazards that have since made the river even more difficult.

Today, expert kayakers and rafters frequent the canyon, and now even hold a river festival including races and other river celebrations. The Gore Canyon Whitewater Festival is held every year on the third Saturday of August and is also the host of the US National White Water Rafting Championship. Gore Canyon was first rafted in the 1970s, and now is even available as a commercial river raft trip. Most outfitters agree that Gore Canyon's whitewater is the wildest commercially available whitewater rafting in the state of Colorado, and perhaps in the nation. Those who are brave enough to raft or kayak Gore Canyon will run rapids such as Pyrite, Tunnel Falls, and Gore Rapid. This is true wild water, so for those who are not expert river runners, Gore Canyon is considered a very dangerous section of the Colorado River.

All content from Kiddle encyclopedia articles (including the article images and facts) can be freely used under Attribution-ShareAlike license, unless stated otherwise. Cite this article:
Gore Canyon Facts for Kids. Kiddle Encyclopedia.