For other uses, see Gosei.

The character and uniqueness of the Gosei is recognized in its social history. The Gosei are the subject of on-going academic research in the United States and in Japan. 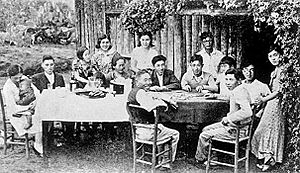 The great-great-grandchildren of these Japanese-Brazilian (Nipo-brasileiros) immigrants would be called Gosei.

Imigration to Brazil began in 1908. Today, the community which grew from the immigrant children, grandchildren, great-grandchildren and great-great-grandchildren has become the largest Japanese emigrant population outside of Japan, including approximately 1.5 million Brazilians. Other communities of Yonsei grew up in the United States,

The use of the term Gosei was modeled after an Issei pattern or template. In the 1930s, the term Issei came into common use. The word replaced the term "immigrant" (ijusha). This change in usage mirrored an evolution in the way the Issei looked at themselves. The label Issei also included the idea of belonging to the new country.

The Issei were born in Japan, and their cultural perspective was primarily Japanese; but they were in another country by choice. Their Gosei great-great-grandsons and great-great-granddaughters grew up with a national and cultural point-of-view that was different from their parents.

Although the Issei kept an emotional connection with Japan, they created homes in a country far from Japan. The Gosei had never known a country other than the one into which they were born.

Differences among these national Gosei developed because of the histories of their Japanese emigrant ancestors.

Japanese-Brazilian (Nipo-brasileiro) Gosei are a small part of an ethnic minority in Brazil. In 1990, 0.8% of the Nipo-Brasileiros community were Gosei.

Japanese-Canadian Gosei are typical for any ethnic group.

Japanese-Peruvian (Nipo-peruano) Gosei make up less than 1.0% of the Nikkei population in 2000.

Gosei in the US

The lives of the Japanese-Americans of earlier generations contrasts with the Gosei because they have English-speaking grandparents. According to a 2011 columnist in The Rafu Shimpo of Los Angeles, "Younger Japanese Americans are more culturally American than Japanese" and "other than some vestigial cultural affiliations, a Yonsei or Gosei is simply another American."

All content from Kiddle encyclopedia articles (including the article images and facts) can be freely used under Attribution-ShareAlike license, unless stated otherwise. Cite this article:
Gosei (fifth-generation Nikkei) Facts for Kids. Kiddle Encyclopedia.