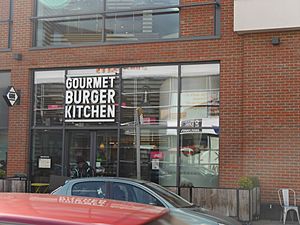 Gourmet Burger Kitchen (GBK) is a restaurant chain in the United Kingdom and Ireland specialising in gourmet burgers. There is a subtle Kiwi theme throughout the restaurants, a reference to the heritage of the original owners.

The company was started in London by New Zealanders Adam Wills, Greg Driscoll, Brandon Allen and Ugandan Kalimali Moses, in 2001. Chef Peter Gordon, a New Zealand-born, London-based chef, oversaw the menu development and the first restaurant opened in 2001, bringing the concept of 'gourmet burgers' to London. GBK is known for its "large" burgers, fresh produce and casual service style. The initial success of the Battersea restaurant led to further openings across London.

In September 2016, the South African firm Famous Brands bought the company for US$143.3 million. In August 2018, the company reported huge losses due to a decline in sales.

In October 2020, it was announced that Ranjit Singh Boparan had acquired the company from administration. However, as part of the deal, 26 restaurants would remain closed, with the loss of 362 jobs. 35 restaurants will remain open.

All content from Kiddle encyclopedia articles (including the article images and facts) can be freely used under Attribution-ShareAlike license, unless stated otherwise. Cite this article:
Gourmet Burger Kitchen Facts for Kids. Kiddle Encyclopedia.