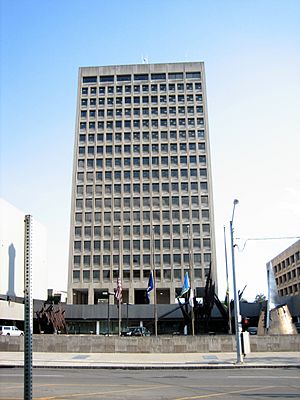 The State Office Building, the center-piece of Government Plaza.

Government Plaza is a building complex in Binghamton, New York containing the offices for the City of Binghamton, Broome County and New York State. The complex is located in Downtown Binghamton on the block bounded by State, Hawley, Isbell and Susquehanna streets. It was constructed as part of a massive urban renewal plan in Binghamton through the late 1960s and early 1970s.

Government Plaza is composed of three buildings which come together to form a U-shaped complex:

An elevated plaza that originally led to the second-story lobby of the State Office Building was torn down in the mid-1990s due to deterioration and increasing maintenance costs.

The State Office Building is infamous for a fire that took place on February 5, 1981. A transformer explosion in the basement of the building spewed toxic PCBs throughout the entire building. While initially expected to only take days to reopen, the cleanup effort revealed the difficulty of removing PCB residue. The building remained closed until October 11, 1994. Multiple environmental samples taken throughout the cleanup had illustrated that despite their best efforts, workers had been unable to remove the residue, leading to several complete decontamination procedures within the building. The duration of the cleanup, combined with the uncertainty of the final effectiveness of the cleanup, led many workers to question whether the building was safe enough for reoccupation. While the initial cost of constructing the building in 1972 was $17 million, the cleanup efforts cost $53 million.

All content from Kiddle encyclopedia articles (including the article images and facts) can be freely used under Attribution-ShareAlike license, unless stated otherwise. Cite this article:
Government Plaza, Binghamton Facts for Kids. Kiddle Encyclopedia.