The Governor Harry W. Nice Memorial/Senator Thomas "Mac" Middleton Bridge, also known as the Potomac River Bridge, is a 1.7-mile (2.7 km), two-lane continuous truss bridge that spans the Potomac River between Newburg in Charles County, Maryland and Dahlgren in King George County, Virginia, United States. The bridge is narrow (one 11-foot (3.4 m) lane in each direction with no shoulders), steep (up to 3.75 percent grade), and has a reduced speed limit (50 mph (80 km/h) on the main span, even slower through the southbound toll gates and plaza). By contrast, the approach roads on both sides of the bridge feature four 12-foot (3.7 m) lanes (2 in each direction), full shoulders, and 55 mph (89 km/h) speed limits. This combination forces vehicles to slow and merge as they cross the bridge, which often results in backups.

This two lane bridge carries U.S. Route 301, which is a spur of U.S. Route 1 and a popular north–south alternative for bypassing the Baltimore-Washington Metropolitan Area and its frequently congested roads such as Interstate 95, Interstate 495 (Capital Beltway), and the Woodrow Wilson Bridge to the north along the Potomac River. The traffic growth/volume in Southern Maryland has led to congestion and delays, especially on holidays and weekends. In 2014, the bridge handled approximately 6.4 million vehicles, with a daily average of approximately 17,500.

It is one of eight toll facilities operated by the Maryland Transportation Authority, and is one of two toll bridges over the Potomac River. The other, the privately owned Oldtown Low Water Toll Bridge, connects Maryland and West Virginia, far upstream. 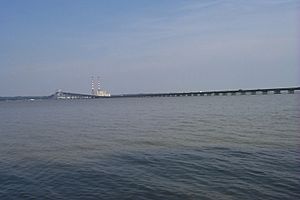 Wide view of the bridge 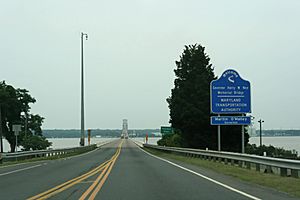 A photograph of the Harry W. Nice Bridge taken from Virginia. The border with Maryland is at the foreground shoreline.

President Franklin D. Roosevelt presided over the ground-breaking ceremony for the bridge in 1938. Known as the Potomac River Bridge when opened in December 1940, the bridge was renamed in 1967 for Harry W. Nice (1877–1941) who served as governor of Maryland from 1935 to 1939. The bridge was the first south of Washington, D.C. to provide a highway link between Maryland and Virginia. In October 2018, the name of retiring state Senator Thomas M. Middleton was added to the bridge, making it officially the Governor Harry W. Nice Memorial/Senator Thomas "Mac" Middleton Bridge.

In June 2006, the Maryland Transportation Authority initiated the Governor Harry W. Nice Memorial Bridge Improvement Project. This project is exploring upgrade/replacement of the main span, which is a bottleneck as the bridge is only two lanes, whereas U.S. Route 301 is a four lane divided highway in both Maryland and Virginia. As of June 2007, it was in the planning stage. In December 2007, The Washington Post reported that six alternatives had been identified. In December 2012, it was reported that the MdTA completed a study of the Nice Bridge and received approval from the federal government to replace the current structure with a span with four lanes and a bike/pedestrian path, to be located just north of the existing bridge, which will be removed upon completion of the replacement crossing. The MdTA estimated the cost of a replacement span at about $850 million, but funding is not currently identified. The project is being coordinated with the Virginia Department of Transportation (VDOT), and is proceeding in conjunction with the Maryland State Highway Administration's U.S. Route 301 South Corridor Transportation Study and the U.S. Route 301 Waldorf Area Transportation Improvements Project.

On November 21, 2013, Governor Martin O’Malley announced that the MD Transportation Authority (MDTA) Board has approved an additional $50 million in its final six-year capital program (FY 2014 – FY 2019) to fund initial design and right-of-way acquisition for the project to replace the Governor Harry W. Nice Memorial Bridge (US 301), which connects Charles County, Maryland and King George County, Virginia, across the Potomac River. The planning phase of the project was completed in fall 2012. The selected alternative consists of a new four-lane bridge built parallel to, and north of, the existing bridge, which would be removed upon completion of the new bridge. Opposition to a new bridge from Governor Larry Hogan had prevented construction from being scheduled. However, on November 21, 2016, the Maryland Transportation Authority Board voted unanimously to build a new, 4-lane bridge just north of the current structure. Construction began in June 2020 with completion slated for 2023. The approved bridge design has several design alterations which shave more than $200 million from the originally projected price of around $1 billion, allowing Governor Hogan to shift his support in favor of the bridge.

All content from Kiddle encyclopedia articles (including the article images and facts) can be freely used under Attribution-ShareAlike license, unless stated otherwise. Cite this article:
Governor Harry W. Nice Memorial Bridge Facts for Kids. Kiddle Encyclopedia.