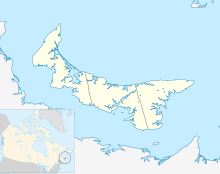 Governors Island is a Canadian island located in Hillsborough Bay, a sub-basin of the Northumberland Strait along the south shore of Prince Edward Island.

Roughly triangular in shape with an area of 32 hectares (80 acres), the western point of Governors Island was used in the past for a lobster processing facility and the remainder of the land was used as an area to graze sheep and cattle. During World War Two, attempts were made to drill for oil to fuel the war effort, though none was found. Privately owned, the island had a small airstrip developed during the 1960s but has since fallen into disuse.

All content from Kiddle encyclopedia articles (including the article images and facts) can be freely used under Attribution-ShareAlike license, unless stated otherwise. Cite this article:
Governors Island (Prince Edward Island) Facts for Kids. Kiddle Encyclopedia.