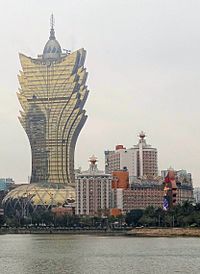 Its casino and restaurants were opened on February 11, 2007, while the hotel was opened in December 2008. The casino offers 800 gaming tables and 1,000 slot machines. The hotel has 430 hotel rooms and suites. The Grand Lisboa is the tallest building in Macau.

The casino is the first in Macau to offer Texas hold 'em poker ring games. It was also the first to offer craps, though several other casinos in Macau now offer the game.

In 2017 it was reported that the Grand Lisboa had the lowest revenue and profits during 2016. It was owned by businessman Stanley Ho.

All content from Kiddle encyclopedia articles (including the article images and facts) can be freely used under Attribution-ShareAlike license, unless stated otherwise. Cite this article:
Grand Lisboa Facts for Kids. Kiddle Encyclopedia.