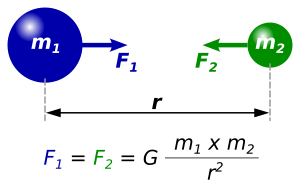 in physics equations, is an empirical physical constant. It is used to show the force between two objects caused by gravity. The gravitational constant appears in Isaac Newton's universal law of gravitation.

All content from Kiddle encyclopedia articles (including the article images and facts) can be freely used under Attribution-ShareAlike license, unless stated otherwise. Cite this article:
Gravitational constant Facts for Kids. Kiddle Encyclopedia.