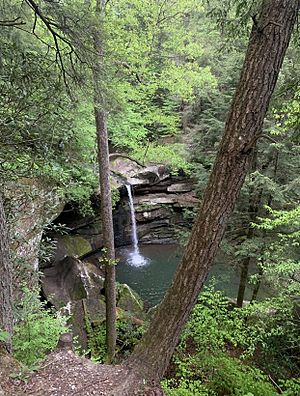 A post office was established in the community in 1853 and remains open to this day. The origins of the name Gray Hawk remain unclear. It could have been named for the many gray colored hawks seen in the area, or its namesakes could be the original landholding Gray and Hawk families.

The climate in this area is characterized by hot, humid summers and generally mild to cool winters. According to the Köppen Climate Classification system, Gray Hawk has a humid subtropical climate, abbreviated "Cfa" on climate maps.

All content from Kiddle encyclopedia articles (including the article images and facts) can be freely used under Attribution-ShareAlike license, unless stated otherwise. Cite this article:
Gray Hawk, Kentucky Facts for Kids. Kiddle Encyclopedia.