Graylands Copse is a largely inaccessible woodland in Graylands, near Horsham, England.

The woodland has a convex outline, being primarily inaccessible at all edges except for an unmaintained opening on the south-western edge, in which a footbridge had existed. The interior is very irregular, defined by dense thickets and dead wood. An unnamed stream cuts through the center of the copse. 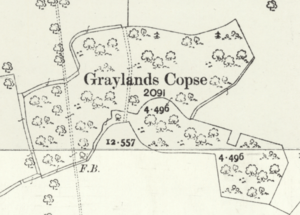 A small pit exists in the opposing south-eastern corner, possibly a man-made quarry feature typical of woodland in the area. One former footpath and one track run through Graylands Copse in a north–south direction, neither are maintained or easily accessible.

All content from Kiddle encyclopedia articles (including the article images and facts) can be freely used under Attribution-ShareAlike license, unless stated otherwise. Cite this article:
Graylands Copse Facts for Kids. Kiddle Encyclopedia.