The event entered local folklore and residents claimed for decades afterwards that the area still smelled of molasses on hot summer days.

Cleanup crews used salt water from a fireboat to wash away the molasses and sand to absorb it, and the harbor was brown with molasses until summer. The cleanup in the immediate area took weeks, with several hundred people contributing to the effort, and it took longer to clean the rest of Greater Boston and its suburbs.

Rescue workers, cleanup crews, and sight-seers had tracked molasses through the streets and spread it to subway platforms, to the seats inside trains and streetcars, to pay telephone handsets, into homes, and to countless other places. "Everything that a Bostonian touched was sticky." 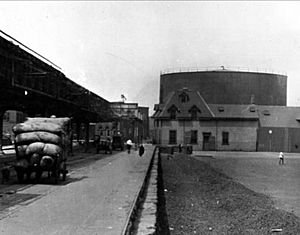 Several factors might have contributed to the disaster. The first factor is the belief that the tank may have leaked from the very first day that it was filled in the year 1915.

The tank was also constructed poorly and tested insufficiently, and carbon dioxide production might have raised the internal pressure due to fermentation in the tank. Warmer weather the previous day would have assisted in building this pressure, as the air temperature rose from 2 to 41 °F (−17 to 5.0 °C) over that period.

The failure occurred from a manhole cover near the base of the tank, and a fatigue crack there possibly grew to the point of criticality.

An inquiry after the disaster revealed that Arthur Jell, USIA's treasurer, neglected basic safety tests while overseeing construction of the tank, such as filling it with water insufficient to check for leaks, and ignored warning signs such as groaning noises each time the tank was filled. He had no architectural or engineering experience. When filled with molasses, the tank leaked so badly that it was painted brown to hide the leakage. Local residents collected leaked molasses for their homes.

A 2014 investigation applied modern engineering analysis and found that the steel was half as thick as it should have been for a tank of its size, even with the lax standards of the day, and it also lacked manganese and was made more brittle as a result. The tank's rivets were also apparently flawed, and cracks first formed at the rivet holes.

In 2016, a team of scientists and students at Harvard University conducted extensive studies of the disaster, gathering data from many sources, including 1919 newspaper articles, old maps, and weather reports. The student researchers also studied the behavior of cold corn syrup flooding a scale model of the affected neighborhood. The researchers concluded that the reports of the high speed of the flood were credible.

Two days before the disaster, warmer molasses had been added to the tank, reducing the viscosity of the fluid. When the tank collapsed, the fluid cooled quickly as it spread, until it reached Boston's winter evening temperatures and the viscosity increased dramatically. The Harvard study concluded that the molasses cooled and thickened quickly as it rushed through the streets, hampering efforts to free victims before they suffocated. 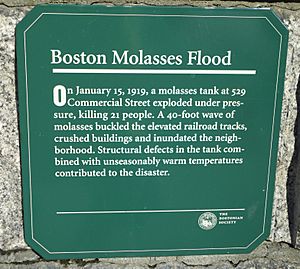 United States Industrial Alcohol did not rebuild the tank. The property formerly occupied by the molasses tank and the North End Paving Company became a yard for the Boston Elevated Railway (predecessor to the Massachusetts Bay Transportation Authority). It is now the site of a city-owned recreational complex, officially named Langone Park, featuring a Little League Baseball field, a playground, and bocce courts. Immediately to the east is the larger Puopolo Park, with additional recreational facilities.

A small plaque at the entrance to Puopolo Park, placed by the Bostonian Society, commemorates the disaster. The plaque, titled "Boston Molasses Flood", reads:

On January 15, 1919, a molasses tank at 529 Commercial Street exploded under pressure, killing 21 people. A 40-foot wave of molasses buckled the elevated railroad tracks, crushed buildings and inundated the neighborhood. Structural defects in the tank combined with unseasonably warm temperatures contributed to the disaster.

The accident has since become a staple of local culture, not only for the damage the flood brought, but also for the sweet smell that filled the North End for decades after the disaster. According to journalist Edwards Park, "The smell of molasses remained for decades a distinctive, unmistakable atmosphere of Boston."

On January 15, 2019, for the 100th anniversary of the event, a ceremony was held in remembrance. Ground-penetrating radar was used to identify the exact location of the tank from 1919. The concrete slab base for the tank remains in place approximately 20 inches (51 cm) below the surface of the baseball diamond at Langone Park. Attendees of the ceremony stood in a circle marking the edge of the tank. The 21 names of those who died in, or as a result of, the flood were read aloud.

All content from Kiddle encyclopedia articles (including the article images and facts) can be freely used under Attribution-ShareAlike license, unless stated otherwise. Cite this article:
Great Molasses Flood Facts for Kids. Kiddle Encyclopedia.