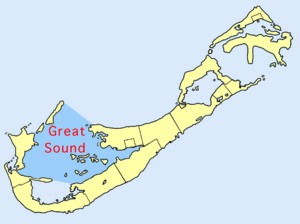 The Great Sound is large ocean inlet (a sound) located in Bermuda. It may be the submerged remains of a Pre-Holocene volcanic caldera. Other geologists dispute the origin of the Bermuda Pedestal as a volcanic hotspot.

The Great Sound dominates the southwest of the island chain and forms a natural harbour. It is surrounded on all sides by islands, except for the northeast, where it is open to the Atlantic Ocean.

To the south, two small peninsulas jut into the sound separating it from the smaller Little Sound. In the east, the Great Sound narrows to form Hamilton Harbour. Bermuda's capital, Hamilton, is on the northern shore of this harbour.

Numerous islands lie within the Great Sound, most of them on the southeastern side of it, including Darrell's Island, Hawkins Island, Hinson's Island, Long Island, Marshall's Island, and Watling Island.

All content from Kiddle encyclopedia articles (including the article images and facts) can be freely used under Attribution-ShareAlike license, unless stated otherwise. Cite this article:
Great Sound Facts for Kids. Kiddle Encyclopedia.