Kids Encyclopedia Facts
Not to be confused with Green Gable.

The building was initially erected by the MacNeil family during the 1830s, relatives of Montgomery who was born nearby the homestead. Interest for the Green Gables property grew in the decades after Montgomery published her novels; resulting in Green Gables purchase by the government of Canada in 1936. The government initially operated the home as a historic house that depicted 19th century farming life on Prince Edward Island. However, by the 1970s, plans were undertaken to refurbish the building to resemble Green Gables as depicted in Montgomery's novels. Since 1985, Green Gables, and the larger National Historic Site operate as a museum on Lucy Maud Montgomery and her novels.

In 1908, Montgomery published Anne of Green Gables, with Green Gables serving as the home for the titular character Anne Shirley. Interest in the home grew after the publication of Anne of Green Gables, and the release of a movie based on the novels in 1934. With Green Gables vacant during the 1930s, the government of Canada purchased the property in 1936; as a part of a larger effort to develop Prince Edward Island National Park. In 1938, plans were made to develop Green Gables into a clubhouse for the adjacent golf course; although these plans were abandoned after public backlash against the proposal. After Montgomery's death in 1942, her body was transported from Ontario to Prince Edward Island, with a funeral ceremony held at Green Gables. 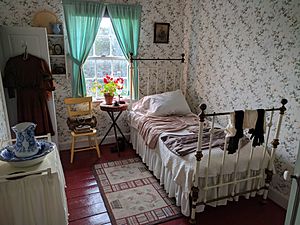 "Anne's Room," is one of several rooms in farmhouse made to resemble the setting in Montgomery's novels

During the 1950s, the home was furnished with period-appropriate furniture and was used as a historic house. During the 1970s, the building was refurnished and remodelled to resemble the Green Gables as depicted in Montgomery's novels. In the same decade, the building was expanded again; before it underwent significant restorations in 1985, after Parks Canada decided to switch the furnishing in the home to reflect how Green Gables was depicted in Montgomery's novels.

On 10 July 1985, Green Gables was officially designated as a Federal Heritage Building as an example of 19th century architecture in the province, and for the home's importance to the literary community. The larger property, including the ruins of Montgomery's homestead were designated as the L.M. Montgomery's Cavendish National Historic Site of Canada in 2004. 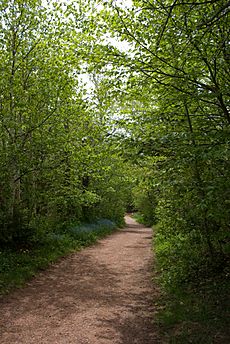 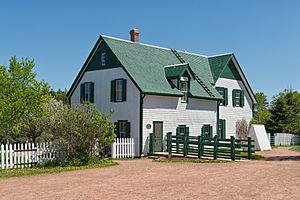 White-painted shingles are used throughout the building, with green being the only other major colour found on the building's exterior.

Green Gables is a 1+1⁄2-storey L-shaped home clad in white-painted shingles throughout; with the only other colour present on the building being the green-gabled rooftop and its window shutters. The green gable and shutters were painted onto the building shortly after the federal government purchased it in 1936, in an effort to make the building more "suitable," for its opening. There are six windows on the two floors of the building, each with shutters. The 220-square-metre-building (2,400 sq ft) includes five bedrooms, a dining room, sewing room, and a parlour. Although wood is used throughout the home, the building's chimneys are made of brick.

All content from Kiddle encyclopedia articles (including the article images and facts) can be freely used under Attribution-ShareAlike license, unless stated otherwise. Cite this article:
Green Gables (Prince Edward Island) Facts for Kids. Kiddle Encyclopedia.