The greenback flounder (Rhombosolea tapering) is a righteye flounder of the genus Rhombosolea, found around southern Australia and New Zealand.

The length of the holotype is 242 mm. 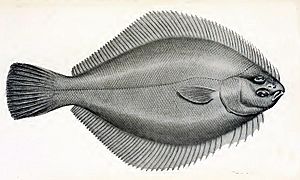 Eyes on the right side, separated by a smooth narrow space, one-fourth the diameter of the eye. The lower eye is noticeably in advance of the upper and the diameter is 4 '8 in the length of the head, or but slightly less than that of the snout. The latter is produced into a fleshy process directed downwards over the mouth. The anterior nostril may be closed by a trilobed process. The hinder one lies posterior to the front edge of the lower eye and is a simple pore. The mouth is of moderate size extending to nearly below the anterior margin of the eye: it is more extensive on the blind side, and has two rows of teeth in each jaw. The nostrils have a higher and more anterior position than on the right side. Gill-rakers are small, conical, and smooth, slightly fenibriated on the inner side. About thirteen in number on the lower limb, scarcely developed on the hinder one.

Gills three and a half, a slit behind the last, equal to the diameter of the eye. The gill openings are small, not extending to the upper angle of the pectoral above, and closed below the preopercular angle beneath.

Scales.—The forepart of the head, the interorbital space, the margins of the opercula and the bases of the pectorals are naked. The body is covered on both sides with cycloid scales, non-imbricate on the anterior portion, but overlapping behind, and upon the caudal peduncle. Fins scaleless. The lateral line runs almost straight, there being a slight curve over the anterior half of the pectoral, which is less marked on the blind side; anteriorly on both sides, the line is continued over the head to the base of the seventh or eighth dorsal ray.

Colours.—Uniform grey above and yellow beneath.

All content from Kiddle encyclopedia articles (including the article images and facts) can be freely used under Attribution-ShareAlike license, unless stated otherwise. Cite this article:
Greenback flounder Facts for Kids. Kiddle Encyclopedia.