Grevillea banksii, known by various common names including red silky oak, dwarf silky oak, Banks' grevillea, Byfield waratah and, in Hawaii, Kahili flower or Kahili tree. It is a plant of the large genus Grevillea in the diverse family Proteaceae. Native to Queensland, it has been a popular garden plant for many years though has been superseded somewhat horticulturally by smaller and more floriferous hybrids. A white-flowered form G. banksii fo. albiflora is known as white silky oak.

Grevillea banksii was first described by the botanist Robert Brown, who gave it its epithet in honour of Sir Joseph Banks.

It is a tall, slender or spreading shrub, or small tree up to 7 m (23 ft) high. Its leaves are pinnate with 3-11 deeply divided, linear to lanceolate segments 5–10 cm (2–4 in) long and 1 cm wide, with curled-back margins. Flowers are bright red or creamy-white, in clusters up to 15 cm (6 in) long. It flowers for most of the year, but mainly in winter and spring.

Grevillea banksii is found on the Queensland coast from Ipswich to Byfield National Park. Here it grows on headlands, ridges and forest.

The species has also been introduced elsewhere in the world. It has naturalized in the drier parts of southern portion of the island of Hawai'i and across large areas in eastern Madagascar. 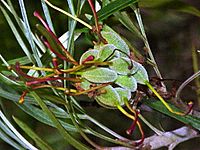 Various forms of Grevillea banksii have been in cultivation for many decades, however it is less seen now than previously as it has been replaced by smaller, more compact, hybrids such as G. 'Robyn Gordon' and G.' Superb'. These newer plants are more compact and have longer flowering periods and are more in demand in the era of the shrinking garden.

Grevillea 'Ruby red' is a prostrate red flowering form of uncertain origin which is in cultivation, often grafted onto Grevillea robusta.

However, it has left a rich horticultural legacy, being one of the parents of G. 'Robyn Gordon', which has been one of the most commercially successful garden plants in Australian horticultural history. It is also parent of other garden plants Grevillea 'Honey Gem', G. 'Superb', G. 'Misty Pink', G. 'Pink Surprise', and possibly G. 'Moonlight'.

All content from Kiddle encyclopedia articles (including the article images and facts) can be freely used under Attribution-ShareAlike license, unless stated otherwise. Cite this article:
Grevillea banksii Facts for Kids. Kiddle Encyclopedia.