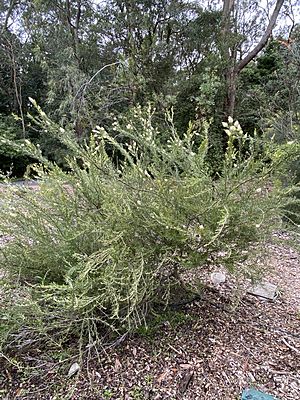 Grevillea trachytheca, commonly known as vanilla grevillea or the rough-fruit grevillea is a shrub of the genus Grevillea native to an area in the Mid West and Gascoyne regions of Western Australia.

The erect to spreading evergreen shrub typically grows to a height of 0.6 to 2 metres (2.0 to 6.6 ft) and has non-glaucous branchlets. It has simple, flat, linear tripartite mid-green leaves with a blade that is 15 to 35 millimetres (0.59 to 1.38 in) and 1 to 2 millimetres (0.04 to 0.08 in) wide. It blooms between May and October and produces a terminal raceme irregular inflorescence with white or cream strongly-scented flowers and white or cream styles. Later it forms pitted, ellipsoidal or ovoid and glabrous fruit that are 11 to 14 mm (0.4 to 0.6 in) long. It regenerates from seed only and is very closely related to Grevillea crithmifolia, which has a shorter conflorescence and divided leaves.

It is commonly found amongst medium to low trees in shrubland it is restricted to areas near Kalbarri and the lower part of the Murchison River. It grows in calcareous sandy soils.

Grevillea trachytheca is used in gardens with dry soils that is suitable in a Mediterranean climate and in coastal areas, it can be used as an informal hedge, border planting or as a windbreak. It prefers full sun and can tolerate wind and salt.

All content from Kiddle encyclopedia articles (including the article images and facts) can be freely used under Attribution-ShareAlike license, unless stated otherwise. Cite this article:
Grevillea trachytheca Facts for Kids. Kiddle Encyclopedia.