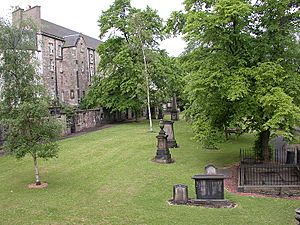 Greyfriars Kirkyard is a cemetery in Edinburgh, Scotland. It surrounds Greyfriars Kirk in the Old Town. Burials have been held since the late 16th century. The kirk and its monuments are protected as a category A-listed building. The kirkyard is said to be haunted.

Many notable Scots are buried in the kirkyard including Sir George Mackenzie, Lord Advocate Mary Erskine, Regent of Scotland George Buchanan, and John Douglas, 4th Earl of Morton. The kirkyard is the resting place of Greyfriars Bobby, a Skye terrier who stayed by his master's grave in the kirkyard for 14 years.

All content from Kiddle encyclopedia articles (including the article images and facts) can be freely used under Attribution-ShareAlike license, unless stated otherwise. Cite this article:
Greyfriars Kirkyard Facts for Kids. Kiddle Encyclopedia.