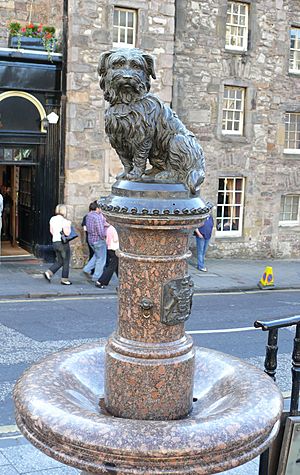 Greyfriars Bobby (4 May 1855 - 14 January 1872) was a Skye terrier. He belonged to a policeman in Edinburgh named John Gray. When Mr. Gray died in 1858, he was buried in Greyfriars Kirkyard. Bobby stayed near the grave of Mr. Gray long after the funeral. He would not leave.

The little dog came to be called Greyfriars Bobby. He stayed at the grave for the rest of his life. Bobby died in 1872. He was buried just inside the gates of the kirkyard. His grave is marked by a small pink granite stone. Bobby's collar and bowl are displayed in the Museum of Edinburgh.

In 1873, Lady Angela Burdett-Coutts erected a drinking fountain (pictured) in Edinburgh to the memory of Greyfriars Bobby. The bronze statue of Bobby on top of the fountain was made by William Brodie. The fountain and statue have long been favourites of Scots.

The fountain is near the George IV Bridge in Edinburgh. The statue of Bobby sits on top of a column of granite. At the bottom, there is an eight-sided drinking basin for dogs. Near the top, there is a drinking spout for people. In 1957, the water was turned off because of health concerns.

Eleanor Stackhouse Atkinson wrote a book about Bobby in 1912. It has never been out of print. A movie based on the book was made in 1961. This movie stars Tam O'Shanter as Bobby, and is described as "a tearjerker, one that saddens and lifts the spirit at the same time."

All content from Kiddle encyclopedia articles (including the article images and facts) can be freely used under Attribution-ShareAlike license, unless stated otherwise. Cite this article:
Greyfriars Bobby Facts for Kids. Kiddle Encyclopedia.