Greyfriars Kirk, today Greyfriars Tolbooth & Highland Kirk, is a parish kirk (church) of the Church of Scotland in central Edinburgh, Scotland. The kirk stands on the site of a pre-Reformation establishment of the Franciscan order, the "Grey Friars".

It is one of the oldest surviving buildings built outside the Old Town of Edinburgh, having been begun in 1602 and completed circa 1620. It sits to the south of the Grassmarket, adjacent to the rear of George Heriot's School, itself founded in 1628. For many years, Greyfriars Kirk was divided into two places of worship – Old Greyfriars (erected 1614) and New Greyfriars (erected 1718). 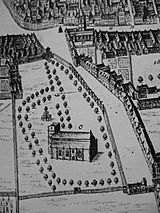 Greyfriars Kirk has an important place in the history of the Scottish Covenanters. In 1638 the National Covenant was presented and signed in front of the pulpit. In 1679, some 1,200 Covenanters were imprisoned in the Kirkyard pending trial.

In 1845 a fire destroyed the furnishings and the roof. In the mid 19th century, the Rev. Robert Lee, then minister of Old Greyfriars, led a movement to change the worship, introducing the first post-Reformation stained glass windows in a Presbyterian church in Scotland, and also one of the first organs. He received considerable criticism at the time, but most of his proposals were subsequently widely accepted in the Church of Scotland.

In late September 1912, over a thousand people, many of them from Ulster, signed the Ulster Covenant at the kirk. The Covenant bitterly opposed the Third Home Rule Bill, and thus opposed Home Rule for Ireland.

The two congregations united in 1929 and the historic church building was subsequently extensively restored. The interior dividing wall between the two former separate sanctuaries was removed as part of these renovations, completed in 1938. When they were completed the vault containing the family of Lauder of that Ilk found itself located in the kitchen rather than within part of the church proper.

Given the depopulation of Edinburgh's Old Town in the early part of the 20th century, many neighbouring church buildings were closed and their congregations united with Greyfriars, including the New North Church and Lady Yester's Church. In 1979 the congregation united with the former Highland Tolbooth St John's Church on the Royal Mile (now The Hub, the headquarters of the Edinburgh International Festival society).

Four ministers and one elder of Greyfriars Kirk have been Moderators of the General Assembly: 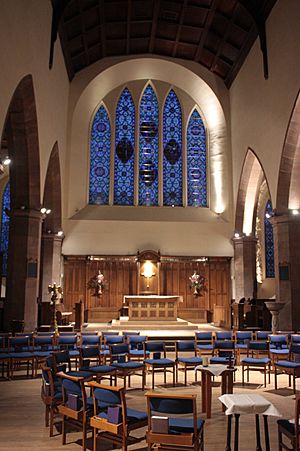 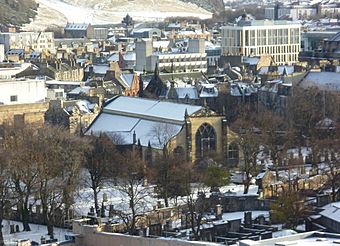 The graveyard surrounding the church, Greyfriars Kirkyard, is in the hands of a separate trust. Numerous well known people are buried in this graveyard including Lord Monboddo and his daughter Eliza. For many, the graveyard is associated with Greyfriars Bobby, the loyal dog who guarded his master's grave.

The kirkyard is reputedly haunted by the restless spirit of the infamous 'Bluidy' Sir George Mackenzie, a former Lord Advocate, which is said to cause bruising and minor cuts and grazes on those who come into contact with it.

All content from Kiddle encyclopedia articles (including the article images and facts) can be freely used under Attribution-ShareAlike license, unless stated otherwise. Cite this article:
Greyfriars Kirk Facts for Kids. Kiddle Encyclopedia.