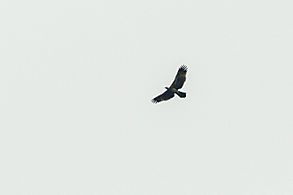 Gurney's eagle (Aquila gurneyi) is a large eagle in the family Accipitridae. It is found in New Guinea and Wallacea, and is an occasional vagrant to Australia.

This eagle is a fairly large species, though mid-sized as a member of the genus Aquila. It is mainly dark brown to black, with paler undersides to its flight feathers and a rounded tail. Its body length is 74–86 cm (29–34 in) with a wingspan of between 1.65 and 1.9 m (5.4 and 6.2 ft). One immature bird reportedly weighed 3.06 kg (6.7 lb). Females are larger than males. Its wings are held level when gliding. It feeds on mammals (such as cuscuses), reptiles, fish, and birds.

Juveniles have brown scapular feathers, wing coverts, and back, mottled with gray and buff. The black tail is faintly barred, and the head and underparts are light brown fading into a cream-colored belly and legs.

Gurney's eagle is found from the Moluccas to Irian Jaya and most of New Guinea, from sea level to 1500 meters above sea level. It has been recorded from Saibai and Boigu islands in north-western Torres Strait, thus putting it on the Australian bird list. it inhabits a wide range of habitats from sea level to the snow line.

Gurney's eagle occurs at low population densities and is likely to be declining slowly through habitat loss and degradation. It is considered to be Near Threatened and is listed on CITES Appendix II.

All content from Kiddle encyclopedia articles (including the article images and facts) can be freely used under Attribution-ShareAlike license, unless stated otherwise. Cite this article:
Gurney's eagle Facts for Kids. Kiddle Encyclopedia.