The Bear Seamount, a guyot.

A guyot is an underwater mountain or seamount with a flat top. This geologic feature is also called a tablemount. In general, the guyot or tablemount is over 200 meters (660 feet) below the surface of the sea. The diameters of these flat underwater summits may be more than 10 km (6.2 mi).

The existence of flat-topped mountains below the surface of the ocean was established in 1965. Harry Hammond Hess used echo-sounding equipment to map the floor of the ocean. The research revealed that some undersea mountains had flat tops. 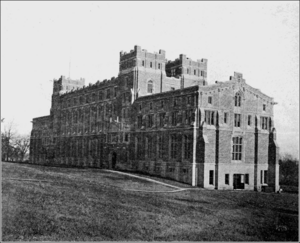 Hess called these undersea mountains "guyots" because they reminded him of Guyot Hall at Princeton University. The flat roof was a special feature of this building. Guyot Hall was named after the 18th century geographer Arnold Henry Guyot. In other words, the geology term "guyot" comes from the name.

Guyots show evidence of having been above the surface at one time. The exposed area was shaped by erosion caused by rain, wind and waves.

The Hawaiian islands plus former islands which are now beneath the sea make up the Hawaiian–Emperor seamount chain, and five of the peaks in the chain are guyots.

All content from Kiddle encyclopedia articles (including the article images and facts) can be freely used under Attribution-ShareAlike license, unless stated otherwise. Cite this article:
Guyot Facts for Kids. Kiddle Encyclopedia.