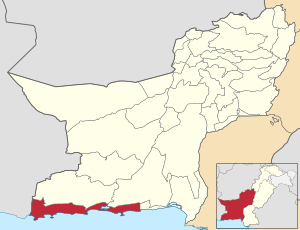 Gwadar was notified as a district on July 1, 1977 when Makran Division was created and divided into three districts. Gwadar is the headquarters of Gwadar District. Previously it was one of 3 tehsils of Makran District before the district was upgraded to a division. For administrative purposes, the district is divided into two sub-divisions, namely Gwadar and Pasni. These sub-divisions are further divided into tehsils and sub-tehsils. Gwadar sub-division comprises two tehsils, named Gwadar and Jiwani, and one sub-tehsil named Suntsar. Pasni sub-division is divided into Pasni and Ormara tehsils. Gwadar district, with its 600 kilometres long coast line and un-irrigated tracts of Kulanch and Dasht valleys, has always been an important chapter of Makran’s history.

The district of Gwadar is administratively divided into the following tehsils:

All content from Kiddle encyclopedia articles (including the article images and facts) can be freely used under Attribution-ShareAlike license, unless stated otherwise. Cite this article:
Gwadar District Facts for Kids. Kiddle Encyclopedia.