Gwadar is on the southwestern coast of Pakistan, on the Sea of Oman. It is between three increasingly important regions: the oil-rich Middle East, heavily populated South Asia and the economically emerging and resource-laden region of Central Asia. The Gwadar Port is expected to generate billions of dollars in revenues and create at least two million jobs. In 2007, the government of Pakistan handed over port operations to PSA Singapore for 25 years, and gave it the status of a Tax Free Port for the following 40 years. There is also money invested into the port by the People's Republic of China. The strategic PRC plan to be engaged in many places along oil and gas roads is evident. 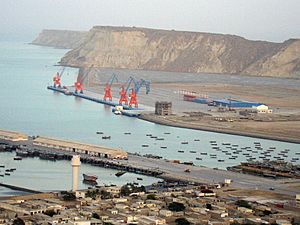 All content from Kiddle encyclopedia articles (including the article images and facts) can be freely used under Attribution-ShareAlike license, unless stated otherwise. Cite this article:
Gwadar City Facts for Kids. Kiddle Encyclopedia.