It was originally named Gwynne Ville after the Gwynne family who owned the property. It was sold in two large lots, both of which were subdivided. The first area, owned by Mr John Gwynne, consisted of 86 allotments, and went to auction on 3 March 1886. The second section, being bordered by Northfields Avenue, Gipps Rd and Murphy's Lane, was auctioned in 47 allotments by Mr William J Gwynne on 27 November 1886.

It has an area of bush heritage land on its southern side located in and around Wiseman Park. There are two schools, Gwynneville Public School and Saint Brigid's Primary School. A neighbourhood shopping centre is located at the eastern end of Gipps Road and includes a post office, petrol station and food shops. Also in the area is the Wiseman Park Bowling Club and the Beaton Park Leisure Centre, a major sporting and fitness venue for the city. 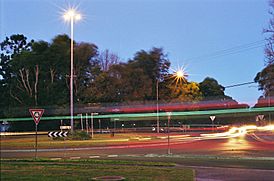 Gwynneville is divided by the Princes Motorway and its interchange with Wollongong's Memorial Drive. However being both centrally located and bordering the University of Wollongong to the north it remains a popular suburb for students seeking accommodation.

All content from Kiddle encyclopedia articles (including the article images and facts) can be freely used under Attribution-ShareAlike license, unless stated otherwise. Cite this article:
Gwynneville, New South Wales Facts for Kids. Kiddle Encyclopedia.