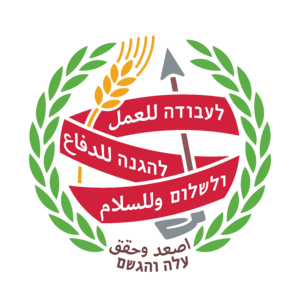 The movement was founded in 1924 by youth working to defend their rights. The first name of the movement was "Hanoar HaOved" ("The Working Youth") and it was connected to the Histadrut (Israeli workers union). In 1959, it was connected with "HaTnua HaMeu'he'det" (Hebrew: התנועה המאוחדת, "The United Movement") and the name was changed to "HaNoar HaOved VeHaLomed." It is a sister movement of Habonim Dror which is active abroad, outside of Israel. 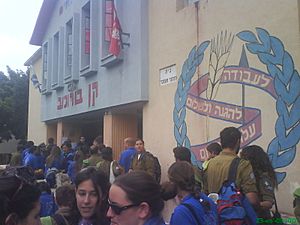 The ken (local chapter) of HaNoar HaOved VeHaLomed in the Borochov neighborhood of Givatayim, near Tel Aviv

The movement is organized by junior and senior counselors who plan and hold programs for younger members. These are after-school activities and also during school holidays. Usually members join in elementary school in fourth grade. The chance to become a junior counselor starts in ninth grade, with a training program during the summer before starting tenth grade. Each branch is assigned a leader doing the national service year after high school, guiding the local junior and senior counselors. Much of the programs are about Israeli and Jewish history and culture. (See Values, below)

HaNoar HaOved Ve HaLomed is a Zionist educational and social organization. It believes that the State of Israel is the homeland of the Jewish people. Its members are dedicated to living in Israel and taking part in defending it and building it. That means that most or all members do a year of national service in the community after high school, then are drafted into the Israeli army after high school, and afterwards plan to live in Israel as adults. They believe in the values of democracy and socialist principles like social welfare to take care of the weaker members of the population. They may want to join a kibbutz or other cooperative way of living. They often join the youth wings of Israeli political parties and take part in rallies and work in support of their beliefs.

Not all members follow the Jewish religion. Those from Jewish families usually come from a secular or traditional home, as do the majority of Israelis. They see Jewish tradition and Jewish history as a source of inspiration and influence. They respect all the cultures that make up Israel's pluralistic society and uphold freedom of speech and worship. There are branches in Israel for Arab and Druze youngsters. The movement website has pages in Hebrew, Arabic, Russian, and English. 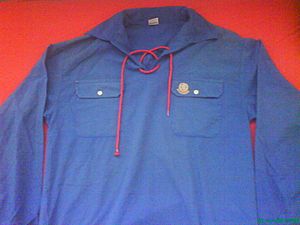 A cotton long-sleeved collared shirt is typical of several Israeli youth movements. The shirt of the HaNoar HaOved VeHaLomed is a blue shirt, the color symbolising the working class. The red lacing at the neck opening is the color which symbolises Socialism. The shirt is printed front and back with white lettering describing the movement with its symbols, and sometimes giving locations of the wearer's local ken or for a movement event.

In the 1990s, following the decline of the kibbutz movement, HaNoar HaOved VeHaLomed began to re-examine the ideal life path of its members, which had always begun with settling kibbutzim in gar'inim after finishing their mandatory period of army service. Instead, a model started to be put forward in which bogrim ("graduates") of the movement formed small urban communes working in society, particularly in education. In the early 21st century there are about 1,000 members of HaNoar HaOved VeHaLomed's Tnuat Bogrim ("Movement of Graduates"). They live in small communes in cities or on kibbutzim. Many have jobs in education and the youth movement. Together, the youth movement and the Tnuat Bogrim are called the "Dror-Israel" movement, which is named after the historical "Dror" movement in Europe.

All content from Kiddle encyclopedia articles (including the article images and facts) can be freely used under Attribution-ShareAlike license, unless stated otherwise. Cite this article:
HaNoar HaOved VeHaLomed Facts for Kids. Kiddle Encyclopedia.