The Haines Shoe House is a shoe-shaped house in Hellam Township, Pennsylvania about two miles west of the borough of Hallam, on Shoe House Road near the Lincoln Highway.

Modeled after a work boot, the house was built by shoe salesman Mahlon Haines in 1948 as a form of advertisement. His shoe business claimed it made shoes "from hoof to hoof" because the company began the process with raising the cattle. The house, which is 25 feet (7.6 m) tall and contains five stories, was once rented out to couples, and is now open for public tours. It is located on Shoe House Road, next to a shoe-shaped doghouse. Haines requested the design by handing a work boot to an architect and saying, "Build me a house like this." The living room is located in the toe, the kitchen is located in the heel, two bedrooms are located in the ankle, and an ice cream shop is located in the instep. There is also a stained glass panel that shows Mahlon holding a pair of shoes with a message below it that reads, "Haines the Shoe Wizard". Fire escapes were added in the 1960s. 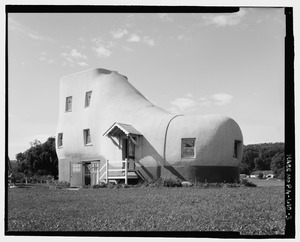 Haines never lived in the shoe house but in his later years after marrying his 2nd wife he built a home across the street. The shoe house was initially made available as a weekend vacation spot for 38 elderly couples a year; the first such couple were John F. and Liza Baum of Loganville. Shoe House vacation contests were also held for a few seasons among newlyweds affiliated with Haines' shoe stores; an early winner in 1950 had all expenses paid for a week, including the service of a maid and butler, and went home with a free pair of shoes. The house was offered for rent by the public in the mid-1950s.

Upon Haines' death in 1962, the house was given to his employees, who sold it two years later to a dentist; after about 20 years of tours and service as an ice cream parlor, it started going to ruin until it was bought in 1987 by Haines' granddaughter, Annie Haines Keller, who began renovations. After Keller could no longer maintain the house, it was sold to Charles and Ruth Miller, who gave tours for eight years before selling it in 2003 to Colleen and Ronald Farabaugh. The house received a small renovation and new paint in 2007. The seventh owners were Jeff and Melanie Schmuck who bought the house in 2015. In 2018, with help by a local lift truck company, a water leak in the house's "toe" was repaired and the exterior was painted in the original canary-yellow color, with a brown sole and highlights added. Co-owner Melanie Schmuck died from "health complications" in February 2019.

The Shoe House was visited in the eighth season of the reality television series The Amazing Race, originally broadcast in 2005, and was featured on HGTV's What's With That House in 2007. The Farabaughs were happy about the publicity though not permitted to talk about the house's appearance on The Amazing Race until two years later.

All content from Kiddle encyclopedia articles (including the article images and facts) can be freely used under Attribution-ShareAlike license, unless stated otherwise. Cite this article:
Haines Shoe House Facts for Kids. Kiddle Encyclopedia.