Hakea clavata, commonly known as coastal hakea is a shrub that is endemic to an area along the south coast of Western Australia. It has thick leaves, pink and grey flowers and grows on rocky outcrops. 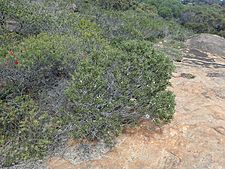 Hakea clavata was first formally described in 1805 by Jacques Labillardière in Novae Hollandiae plantarum specimen. Labillardière may have made a type collection when at the Esperance region in December 1792. The specific epithet (clavata) is derived from the Latin word clava meaning "club", referring to the club-shape of the leaves.

Coastal hakea is found on the mainland and on some of the islands between Israelite Bay and Esperance and a single population is known at Hopetoun to the west. The range covers southeastern areas of the Southwest Botanical Province. The species grows in rocky sandy clay soils among granite outcrops and withstands salt laden winds.

All content from Kiddle encyclopedia articles (including the article images and facts) can be freely used under Attribution-ShareAlike license, unless stated otherwise. Cite this article:
Hakea clavata Facts for Kids. Kiddle Encyclopedia.