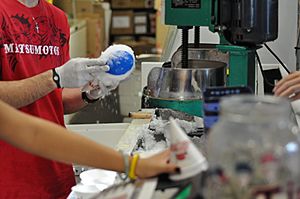 Closeup of the Matsumoto Shave Ice in Haleʻiwa

Haleʻiwa is a North Shore community and census-designated place (CDP) in the Waialua District of the island of Oʻahu, City and County of Honolulu. Haleʻiwa is located on Waialua Bay, the mouth of Anahulu Stream (also known as Anahulu River). A small boat harbor is located here, and the shore of the bay is surrounded by Haleʻiwa Beach Park (north side) and Haleʻiwa Aliʻi Beach Park (south side). Further west from the center of town is Kaiaka State Recreation Area on Kiaka Point beside Kaiaka Bay. As of the 2020 census, the CDP had a population of 4,941. The 2018 estimate was 4,040. It is the largest commercial center on the North Shore of the island. Its old plantation town character is preserved in many of the buildings, making this a popular destination for tourists and residents alike, visiting surfing and diving sites along the north shore.

Haleʻiwa is located at 21°35'24" North, 158°6'50" West (21.590050, -158.113928), southwest along Kamehameha Highway (State route 83) from Pūpūkea. At Haleʻiwa, Kamehameha Highway becomes state route 99 (at the traffic circle known as "Weed Circle"), which runs eastward up across the Oʻahu central plateau to Wahiawā. A new bypass route (Joseph P. Leong Highway) avoids both the traffic circle and Haleʻiwa, extending state route 83 to just north of Haleʻiwa town. Haleʻiwa Road and both Kaukonahua Road and Waialua Beach Road from Weed Circle go south and southwest into Waialua across Paukauila Stream.

In 1898 a businessman named Benjamin Dillingham opened a hotel in the North Shore area and named it Haleʻiwa. In the Hawaiian language, hale means "house", and the ʻiwa is a frigatebird.

According to Hawaii Town 1984 Haleiwa became a State Historic, Cultural and Scenic District in Hawaii.

The 16th Coast Artillery's Battery F was assigned to four 8-inch M1888 railway guns that were located nearby on specially made spurs. These railway guns were soon dismounted and designated as Battery Kahuku. On December 7, 1941, two P-40B fighters, piloted by George Welch and Kenneth M. Taylor, managed to scramble against the Japanese attack on Pearl Harbor took off from the now-abandoned Haleʻiwa Airfield.

There were 770 households, out of which 28.8% had children under the age of 18 living with them, 45.7% were married couples living together, 14.4% had a female householder with no husband present, and 31.7% were non-families. 24.4% of all households were made up of individuals, and 8.7% had someone living alone who was 65 years of age or older. The average household size was 2.88 and the average family size was 3.46.

Matsumoto's Shave Ice, a local island favorite, is located in Haleiwa town and sells Oahu's most popular shave ice. It has been open for over half a century now, and is open daily Monday to Sunday from 8:30AM to 6:00PM.

"Haleiwa Beach Park provides a plethora of possibilities including surfing lessons which are offered year round by Uncle Bryan's Sunset Suratt Surf School and the North Shore Surf Girls and is walking distance from shopping, eating and sightseeing in historic Haleiwa Town."

The Hawaii Department of Education operates public schools. Haleiwa Elementary School is in the CDP.

Sunset Beach Elementary School has a Haleiwa address and is in the Pupukea CDP.

Panoramic image of Haleiwa Hotel in 1902, by Melvin Vaniman

All content from Kiddle encyclopedia articles (including the article images and facts) can be freely used under Attribution-ShareAlike license, unless stated otherwise. Cite this article:
Haleiwa, Hawaii Facts for Kids. Kiddle Encyclopedia.