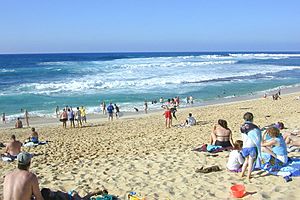 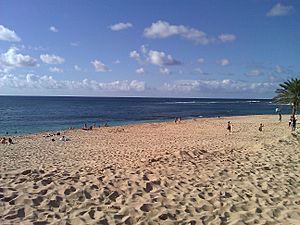 Pūpūkea is a community and census-designated place (CDP) in the Koʻolauloa District on the island of Oʻahu, City & County of Honolulu, Hawaii, United States. In Hawaiian, pūpūkea means "white shell". As of the 2010 Census, the CDP had a population of 4,551. The Koʻolauloa District ends at Waimea Bay, with the Waialua District extending south and westward.

Pūpūkea is a popular area on Oʻahu's North Shore for living and for visiting. The best known surfing sites of Velzyland, Sunset (at Sunset Beach Park), Kammieland, Pūpūkea, ʻEhukai, Pipeline (these latter two off adjacent ʻEhukai Beach Park and Banzai Beach) and lesser breaks are arrayed off this shore. Popular diving areas known as Three Tables and Sharks Cove are located at Pūpūkea Beach Park. At the southwest end of Pūpūkea is Waimea Bay, with one of the most popular beaches on the island forming the shore at Waimea Beach Park.

Popular residential areas here include the beach lots at Sunset Beach and the uplands of Pūpūkea. The biggest drawback to living in this part of the island is the considerable driving distance to Honolulu.

There were 1,455 households out of which 32.8% had children under the age of 18 living with them, 48.0% were married couples living together, 10.3% had a female householder with no husband present, and 35.6% were non-families. 18.7% of all households were made up of individuals and 3.4% had someone living alone who was 65 years of age or older. The average household size was 2.92 and the average family size was 3.35.

All content from Kiddle encyclopedia articles (including the article images and facts) can be freely used under Attribution-ShareAlike license, unless stated otherwise. Cite this article:
Pūpūkea, Hawaii Facts for Kids. Kiddle Encyclopedia.